You are here: Home / Pachaug River 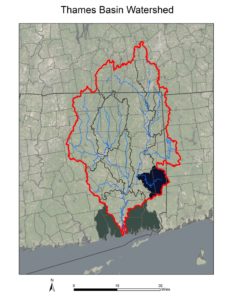 Pachaug River – Pachaug is derived from the Native American word meaning “bend” or “turn in the river”.

The area of the Pachaug River watershed is 40,326 acres.

The Pachaug River was a major fishing ground used by the Mohegan Indians, who constructed stone weirs to direct the water flow and funnel fish (such as eels & shad) to the center of the stream for trapping.

The Pachaug River is 16 miles long. Along its course there are many dams that formerly fueled the industrial revolution. The first two dams going upstream from the Quinebaug River are United Pond Dam (aka Lower Slater Pond) and City Pond Dam (aka Upper Slater Mill Pond), which are both are run of the river dams. It is the goal of the Department of Energy and Environmental Protection to remove the dams in order to eliminate a public safety risk and eliminate another migratory barrier to diadromous fish by restoring a stretch of free-flowing river.

The Town of Griswold commissioned Limnologist George Knoecklein of Northeast Aquatic Research overviewed the Aquatic Plant Survey of Glasgo, Pachaug, Hopeville, and Ashland Ponds During in 2009.

In 2014, the Thames River Basin Partnership featured the Pachaug River in their annual Floating Workshop.