You are here: Home / French River 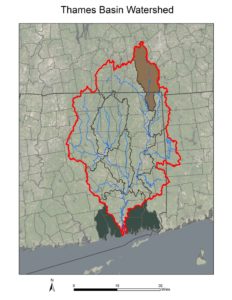 The French River was name was derived from a settlement of French Protestants in Oxford, MA. The Native American name for this River was Maanexit or Mayanexit. The name may mean “where the path is” referencing the old Connnecticut Path, which is known to have crossed through Webster, MA and Thompson, CT.

The area of the French River watershed is 71,737 acres (17% in CT, 83% in MA). It begins in Leicester, MA and flows into the Quinebaug River below the West Thompson Lake Dam in Thompson, CT.

The main tributaries of the French River are Little River, Mill Brook, and Long Branch Brook. The French River below Mill Brook in Massachusetts was once heavily polluted by industry, but has had decades to recover.

Webster Lake is in the French River watershed. The Native American name for this lake is Chargoggagoggmanchaugagagoggchaubunagungamaugg, which may be the longest place name in United States. The name incorporates the name of an Indian village, Monuhchogok and was expanded to reference Native American and settlers co-use of the lake for fishing, meaning “boundary fishing place”. In the 1920’s, a reporter for The Webster Times, Lawrence J. Daly, wrote that it was a Nipmuck Indian word meaning “You fish on your side, I fish on my side and nobody fishes in the middle.”

The Thames River Basin Partnership featured the French River in our 2011 Floating Workshop.

In Massachusetts, a French River Greenway plan is vision to join the Quinebaug Rail Trail to the Midstate Trail.

The US Army Corp of Engineers maintains two flood control and recreational projects in the French River watershed.

The US Army Corp of Engineers established a French River Canoe Trail in Oxford, MA.

The French River Connection is a nonprofit organization dedicated to the preservation and revitalization of the French River corridor in the towns of Webster, Dudley, and Oxford, Massachusetts.

The Webster Lake Association participate in a wide variety of activities intended for the benefit of the lake.

Documents related to water quality in the French River watershed include:
French River Watershed Based Plan