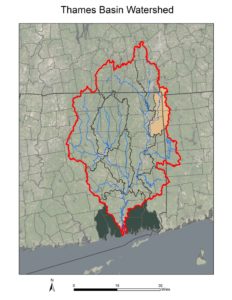 The Native American name for the Five Mile River was Arawakan, which mean, “place between” or “halfway place”. With the actual length of the river measuring around 15 miles long, the question is how was it to be known as the Five Mile River? In the History of Windham County, by Ellen Lerned, it appears that the name was derived from the distance of a remote settlement in the “wild land in Killingly” in relation to an established settlement in Woodstock, CT.

Major Tributaries of the Five Mile River include Dayville Brook and Whetstone Brook.

The Five Mile River flows into the Quinebaug River in Danielson, CT.