You are here: Home / Natchaug River 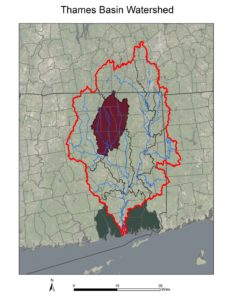 Natchaug is derived from a Native American word meaning “land between the rivers” or “in-between land” for the area between the Fenton and Natchaug rivers.

Interesting fact: Mashapaug Pond in Union, CT has two outlet dams. One outlet flows to the north and is beginning of the Quinebaug River. The other outlet flows to the south into Bigelow Brook, which is part of the Natchaug and Shetucket River watersheds.

The Natchaug watershed is the largest surface water public water supply watershed in the state of Connecticut. Connecticut has special rules to help prevent contamination of this important resource.

The Natchaug River is a Trophy Trout Stream in Eastford-Chaplin-Windham and in Eastford, is categorized as a Trout Park.

Mansfield Hollow Lake Flood Control Project was completed in 1952 by US Army Corp of Engineers as part of a greater Thames River basin flood control project.

The Fenton River, Mount Hope River and Natchaug River were each designated as State of Connecticut Greenways in 2006 as part of a natural resource conservation strategy.

In Windham, Connecticut, the Natchaug River joins with the Willimantic River where it becomes the Shetucket River.

In 2008, the TRBP featured The Natchaug Watershed Basin, Water for People and Nature at our annual Floating Workshop