You are here: Home / Thames River 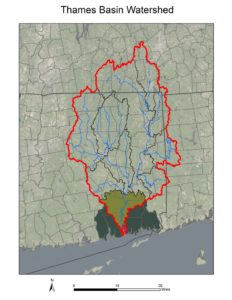 The Thames River was originally known as the Pequot River derived from the Native Americans that inhabited the region, but renamed Thames by European settlers after the River Thames in London, England.

In Connecticut, the correct way to pronounce Thames is THAYMS. It rhymes with James, and with long A and a th-sound at the front.

The Thames River begins at the confluence of the Shetucket and Yantic Rivers at Norwich Harbor. Fifteen miles downstream, it connects with Long Island Sound. The watershed is the third largest land area to drain into the Sound. Unlike the other major rivers that flow into the Sound, the Thames River does not have the same name from source to sea.

Although it is a relatively short river at 15 miles, it has provided important harbors since the mid-17th century. The lower channel is maintained to allow submarines to access to Electric Boat and the US Naval Yard.

US Fish and Wildlife Service Northeast Coastal Areas Study, the Lower Thames River System is included as one of 26 Significant Coastal Habitats Sites in Connecticut

The US Army Corp of Engineers completed a New London Hurricane Protection Barrier in 1986.

Poquetanuck Cove is a two mile long brackish water cove of the Thames River located between the towns of Ledyard and Preston, CT. It is the best preserved tidal cove of the Thames River estuary and has been a repeated focus of our organization since 2006. In 2013, at the culmination of a Conservation Action Planning process, the Towns of Ledyard and Preston entered into an Intermunicipal Agreement to balance conservation and growth to preserve this special resource.

The US Fish and Wildlife Service, in partnership with TRBP, produced a Poquetanuck Cove Canoe/Kayak Trail Guide

The Cities of Groton and New London have developed a Thames River Heritage Park which includes a water taxi service between significant heritage sites in the lower Thames River.