You are here: Home / Shetucket River 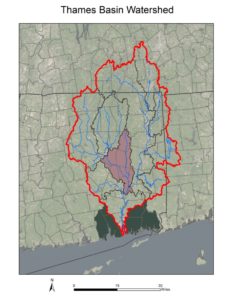 The Shetucket River begins at the confluence of the Willimantic and Natchaug Rivers in Windham and ends after it joins with the Yantic River in Norwich at the beginning of the Thames River.

The Shetucket River was designated a State of Connecticut Greenway in Windham, Franklin, Scotland, Sprague, CT in 2011 and extended into Lisbon, Preston and Norwich ending at historic Chelsea Harbor in the City of Norwich in 2012.

The Shetucket River was designated a National Recreational Trail in 2016.

A paddle guide to the Shetucket River can be downloaded from The Last Green Valley website.

The Shetucket River is considered one of the best salmon fishing rivers in New England.

Diadromous fish are fish that either breed in freshwater and live as adults in salt water (anadromous), or fish that breed in salt water and live as adults in freshwater (catadromous). Dams built to provide hydroelectric power interfere with fish migration. The Plan to Restore Diadromous Fishes to the Shetucket River Watershed was prepared by CT DEEP in 2009.

There are various forms of fish passage allowing fish to migrate upstream in the Shetucket River. Fish passage has been installed at the Greenville, Taftville, Occum and Scotland Dams. Dams on smaller tributaries will either need to be removed or fitted with a custom designed fish passage to increase the breeding habitat for anadromous fish.

The US Army Corp of Engineers completed a project to reduce flooding on the two-mile reach of the Shetucket River extending from the head of the Thames River upstream to the Greenville Dam.

Documents related to water quality in the Shetucket River include:
Spaulding Pond Watershed Based Plan